History of The Garden 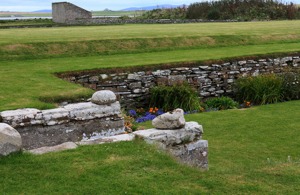 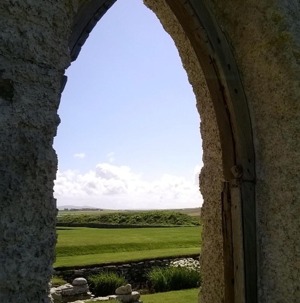 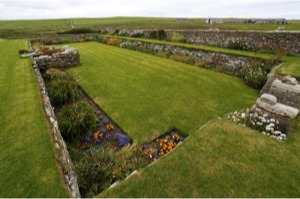 Skaill House is surrounded by rectangular terraced and sunken gardens which create a series of grass platforms and sheltered spaces. Shelter is a necessity as the area is exposed to winds from every direction. The formal framework of these gardens was established during the 18th century but as the house was extended, the gardens were elaborated. Much of the present layout was developed at the end of the 19th century by W.G.T Watt, the 9th Laird, then modified in the 1950’s by Colonel Scarth, the 11th laird.

South east of the house is the largest garden, which comprises a sunken rectangular lawn, framed by grass terraces. The changes in level are achieved by low retaining walls and access between two levels is by two distinctive flights of curved steps. The eastern end of the sunken lawn can also be accessed from outside by a ramp which breaches the grass terraces. The sunken lawn garden was developed by Colonel Scarth and was used for various recreational activities. The Dovecot positioned at the southeast corner of the gardens is an earlier 18th century oblong plan building.

A medieval chapel stood between the entrance to the drive and the new car park until it was pulled down in 1806.

To the south of the house is a smaller sunken flower garden, overlooked by the south wing. This is bound by a parapet wall to the west and a raised grass platform to the east. A small flight of steps gives access to the sunken area at its north end.

The west terrace extends along the broad west front of the Skaill House complex. It is a flat grass terrace retained by stone walls and has two square bays at each end enclosed by parapet walls. Access onto the terrace from the west is obtained by a central flight of steps.

The Courtyard at the centre of the complex (visible from the shop window) was created when the two seventeenth century sections were joined. The sundial carries the date 1668, suggesting when the courtyard was paved. Today the sheltered courtyard is open to visitors as a seating area, and visitors can enjoy a hot or cold drink, ice-cream, or snack, in the shelter of the surroundings of the house.

The walled garden is positioned on the north side of the main drive. It measures 120 feet square enclosed by massive walls of local stone – that on the north side being 10 foot high with a 7 foot high wall on the east and south sides but only 5 foot on the west, but this side is sheltered by the rambling mansion house which has been added to several times over the years even in the present century. The paths and borders, edged with flag stones, are clearly visible today even under the growth of thistles, docks and nettles. The paths are 4 feet in width and the borders vary from 9 to 5 feet, and in the centre it is possible to detect the outline of some beds.

Lean-to potting sheds can be identified along the north wall, and the remains of a glasshouse can be seen in the North West corner of the garden. The designed landscape employs several other walls, gateways and steps which define the garden compartments. A number of these structures were added in the 1950’s.

The northern half of the gardens is enclosed by high stone walls (and partially by the north wing of the house) and is subdivided into two compartments. The east compartment is the kitchen garden, now disused. The Kitchen Garden was bisected by a central north south path and encircled by a peripheral path. These are still visible, although over grown. Its high north wall was used to grow fruit trees against and supported a glass house at its North West corner. This has been removed. Records, provided by the diary of former gardener Hugh Ross, show that that, in 1801, the walled garden produced a wide variety of seasonal vegetables, flowers and fruit for the house. Those mentioned include melons, cucumbers, strawberries, currants, celery, cabbage, cauliflower, turnips, artichokes, apple trees, potatoes, gooseberries, carrots, radishes, willow, bore trees, parsnips, kidney beans, white and brown mustard, rhubarb, larch and leeks. The diary also indicates that the Laird was planting a number of trees at this time, yet none have succeeded.

The western walled compartment is a simple rectangular lawn overlooked by the relatively recent north wing of the house. This area has been used as a drying green and a tennis court in the past. It may also have been cultivated in the 19th century.

At present we have a part-time gardener who tends to the lawns, flowerbeds and courtyard.