Situated in the grounds of Skaill House is Western Europe’s best preserved Neolithic settlement, the world famous Skara Brae. The village of Skara Brae is steeped in 5000 years of history, and was inhabited before the Egyptian Pyramids and Stone Henge were even built.

Skaill House and Skara Brae’s history became intertwined when, in the winter of 1850, a wild storm hit Orkney and uncovered the remains of an ancient dwelling by the coastline of the Bay of Skaill. William Graham Watt, 7th Laird of Skaill House, discovered the remains and spent the next few years personally excavating the site of Skara Brae. Many artefacts were discovered and William Watt set up a private museum in what is now the Dining Room at Skaill House.

Designated a UNESCO World heritage site in 1999, the site of Skara Brae is now in the guardianship of Historic Scotland.

The site presents a remarkable picture of life around 5,000 years ago. Visitors can experience a vivid impression of the realities of a prehistoric village and see ancient homes fitted with stone bed enclosures, dressers and seats. A replica construction allows visitors to fully understand the interior of a prehistoric house. An informative visitor centre provides touch-screen presentations, fact-finding quizzes for children and adults, and an opportunity to see artefacts discovered during further archaeological excavations in the 1970s.

Entrance to Skara Brae is via a joint ticket which includes Skaill House and Skara Brae. 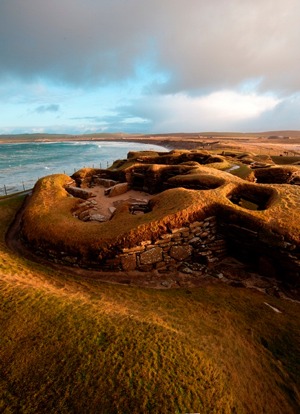 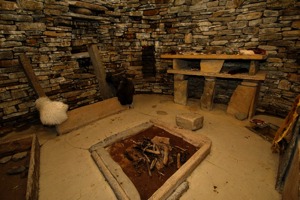